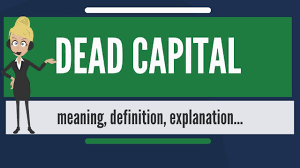 PwC estimates show that Nigeria holds at least $300 billion or as much as $900 billion worth of dead capital in residential real estate and agricultural land alone. The high value real estate market segment holds between $230 billion and $750 billion of value, while the middle market carries between $60 billion and $170 billion in value.

Leading economists have asked the Federal Government to tap into the $300 billion to 900 billion locked in dead capital to cushion the negative impact of COVID-19 on the Nigerian economy and livelihoods. As there is no better time than now to unlock and harness the capital for wealth creation and economic growth.

The Nigerian economy declined by 6.1% in the second quarter of 2020 owing to lockdowns and other measures put to place by the government to contain the spread of COVID-19. Unemployment has risen to 27% in the same quarter, from 235 in the third quarter of 2018. A 6% contraction in GDP and 3% growth in Nigeria’s population translate into almost 10% decline in GDP per capita year-on-year, with impact on poverty and unemployment

Nigeria is underperforming and unlocking dead capital is critical to stop this. We hope to discuss the essence of dead capital, the ways in which it can be unlocked and leveraged to create values and grow wealth and also the potential of its effective utilization.

WHAT IS DEAD CAPITAL?

Experts have found out a direct correlation between a nation’s wealth and having an adequate property rights system. Lack of access to finance is a major contributor to persistent poverty. Research has long shown a positive relationship between financial development and poverty reduction. Individuals and businesses benefit from a range of financial services such as saving, loans and insurance products that allow them to mitigate financial risks and access capital for value-creating endeavours.

In 2001, Hernando de Soto coined the term ‘dead capital’ to describe assets that cannot be converted to economic capital. Dead capital is an economic term for a property that is informally held and not legally recognized. The uncertainty of ownership decreases the value of the assets and/or the ability to lend or borrow against it. REAL ESTATE IS A FORM OF CAPITAL. He posits that the differentiating factor between developed and developing countries is the ability of convert physical assets to capital that creates value. According to De Soto, capital is the most essential component of societal advancement and deserves the utmost priority when developing solutions for developing countries. Presently, a large proportion of Nigeria’s population operate in the informal sector by living in informal dwellings and/or working in the informal sector.

Land tenure system in Nigeria is still largely in the communal and informal sectors. Efforts by the government on formalization of property rights through certificate of occupancy in cities like Lagos are yet to meet the intended goal. Land ownership has been quite a stressful process as a result of this complex land tenure system. The current legal status overseeing the formalization of land ownership is the Land Use Act, which was created to support fair access to land by establishing a certificate of occupancy system with fees and taxes. The Act has failed to establish a uniform land tenure system that govern ownership in the country. More so, most citizens, especially in the rural areas where land is abundant, do not comply with legal provisions of the Act and have no certificates on their land. Issues around proper land registration and omo’nile also makes it difficult to ascertain proper land ownership. About 80% of land in Lagos is unregistered. This makes it difficult for banks to validate claims to land or for land occupants to use their land to create wealth. The Land Use Act vests all land in urban areas, except Federal Government land, ownership to the state Governor who then has the right to grant statutory right of occupancy to individuals and organisations. Land in other areas of the state belong to the Local Government who can then issue a customary right of occupancy. It is illegal to mortgage, sublease or engage a transfer of possessions on land with a customary or statutory right of occupancy without permission of the Governor. This restricted ownership and unregistered land creates dead capital as people cannot easily leverage their assets to create wealth. The country needs to invest in establishing proper and seamless land administration and implement policies that will improve land accessibility. Structural reasons for dead capital – Land Tenure System in Nigeria

Difficulty in regards to registering a property makes it almost impossible for landowners to legalize their properties. In Lagos, it takes an average of 12 procedures to register a property. This process is made difficult due to the poor land administration in Lagos. This does not encourage formal declaration of assets and discourages people away from registering their properties. It also requires an average of 17 procedures to obtain a Construction Permit and. This encourages more informal construction of properties and increases risks in the real estate sector.

In urban land markets, it is expected that pricing systems, demand and supply, information systems as well as social interactions should increase the level of accessibility to land. However, increasing population and multifarious land needs of urban households have put pressure on demand. Hence leaving the pricing system to dictate solely the allocation and distribution of land in the market. At current low-income levels, the urban household is prone to market segregation. The state’s intervention at creating and sustaining equilibrium and equitable access to land through the Land Use Act has created a myriad of problems. A strong example is the problem of centrality in the administration of land leading to bureaucracies and corrupt practices. Stemming from the above market and socio-economic situation, there has been a shift by urban household to access lands through the informal property market.

The process for acquiring, developing and investing in property is not considered transparent enough and is a huge disincentive to the business community. Properties with owners who have violated expressed prohibitions and which do not have updated registry records have left the formal market. Therefore, as a result of bureaucratic challenges, such as red tape and inertia, and the high cost of registration, businesses and households that have left the formal market are comfortable staying informal.

Collateralized loans are the most common lending contract in the formal financial sector. In low-income and middle-income countries such as Nigeria, 70–80 percent of loans require some form of collateral. Loans secured by collateral have far better terms. Having fixed assets as collateral reduces the cost of lending and provide better terms than movable assets collateral. This is because fixed assets are more valuable than movable assets and reduces the risk of bankruptcy.

Policy makers believe that enterprises cannot access finance due to insufficient collateral. However, firms own collateral but they cannot use it. This is because there is a disparity between the collateral that firms have and what banks accept as collateral. Reports have shown that firms have more movable assets than fixed assets. These assets include machineries, vehicles, intellectual property, goods and services and even receivables from creditors. In developed countries with formal property rights, central information for assets and advanced legal systems for collateral, most of these assets are acceptable as collateral. However, in low and middle-income economies, only real estate and new vehicles are accepted as collateral. This means that for services based and countries with large informal economies, little of what they own can be used as collateral. Using this makes them turn to informal sources and personal networks for financing their businesses through unsecured loans rather than formal channels in the financial system in an attempt to drive down the cost of lending.

This can be solved through reforming collateral laws and establishing a single registry for pledges of collateral, so that prospective lenders can easily establish whether there is a prior claim on an asset.

A Blockchain for Land Registry

Blockchain, the distributed public ledger database system can bring tremendous potential applications to property rights and recording of property titles for those who operate in the informal sector. This new technology also gives communities the opportunity to bypass many other private services which assist parties in the West to sell and track titles and deeds; these include: solicitors and notaries, appraisers, insurance firms, mortgage brokers and banks, custody of documents, etc. These new ways of trustworthy registration and authentication would help the communities to secure and manage their capital when selling and renting, their assets. It will also list every single transaction and other people in the system would be able to instantaneously verify these transactions, protecting people or community’s privacy but at the same time giving enough transparency to allow for oversight from anyone.

The blockchain-based land titling concept captures and permanently records each transaction throughout the sale of a property. This means that the buyer achieves near real-time traceability and transparency into the state of the property.

For example, envision two locals in the ancient city of Ife- a buyer and a seller- who have negotiated the sale of a house/land and wish to register their sale deed with the local authorities. They will proceed to the government services offices as they normally would to register the sale deed, which they have in their possession.

The government office will then enter the sale deed into their system, one that is now powered by the blockchain technology. This blockchain-enhanced system then takes over and registers the sale deed in the presence of the buyer and seller. It will also process the sign-offs by both the buyer and seller and push the transaction to the approval stage. After the transaction is made, an automatic transfer of ownership is completed. And importantly, the system will also be able to handle titles with multiple owners.

Establishing a single registry for pledges of collateral, so that prospective lenders can easily establish whether there is a prior claim on an asset is essential in improving access to credit and ensuring trust in the system. Transactions done through the blockchain accrediting process should be legally binding and admissible in court. Countries currently exploring the use of blockchain to reduce the issue of disputes and make land and property more accessible and liquid include Brazil, India and Sweden.

The blockchain system should address the following:

Implementing land reforms will increase participation in the real estate market and increase capital inflows into the sector. With a mortgage to GDP ratio of 0.5%, real estate has been unfavourable to invest in due to the high cost of mortgages and difficulty in accessibility. With a single registry for property and collateral contracts through blockchain, it will bring down the cost of lending, increase trust and liquidity in the market and will spur a new breed of activity in the capital markets for real estate products such as real estate investment trusts and mortgage backed securities. Currently financing real estate projects are currently done by traditional bank lending but with increased participation, it is expected that real estate players asides the NMRC and FMBN would also float bonds in the capital market hoping to seek private capital to develop the sector. This would ultimately boost activity in the capital market, increase capital inflows and overall improved economic activity.